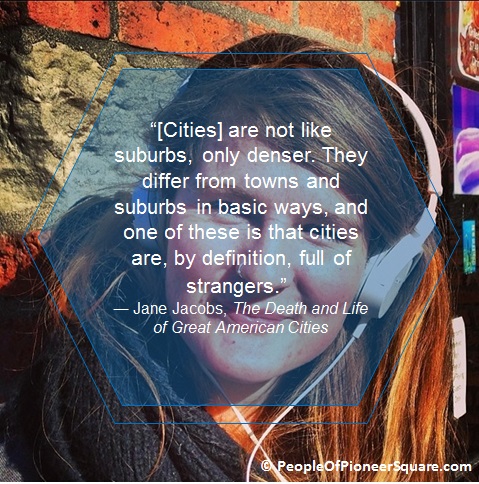 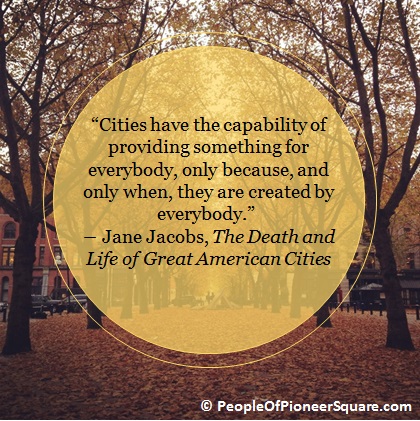 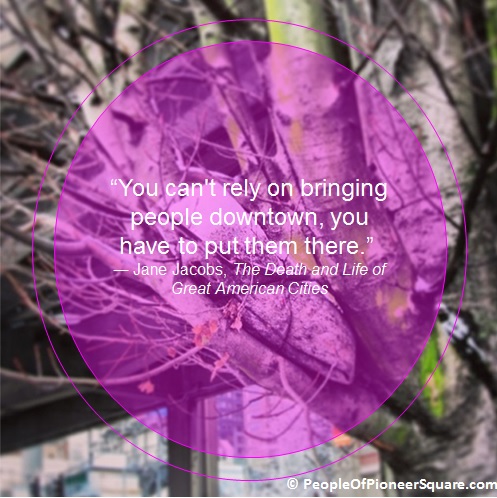 This project has piqued a lot of interest with folks. I’ve had the pleasure and privilege of meeting people with which I ordinarily would not have crossed paths. Most surprising (to me), only one person has declined to have his photograph taken but still spoke to me. Everyone has been incredibly supportive and very interested in learning along with me.

Just last week, someone stopped me on the street to thank me for the blog. He said that two instances came to mind where he thought of the blog before engaging someone in line at his coffee shop, and again with someone on the street. It’s gratifying to know this project has provided someone with an engagement model for communicating with others. I hope there’s more of that happening everywhere. We can’t leave things to a small group of concerned citizens. We all have to be in that group.

This site is an opportunity to share perceptions. Two come to mind this month. One was of a couple just arrived from LA, and under the impression that everyone in Bellingham was happy. The other one was of a person in Capitol Hill whom felt that Pioneer Square captures the bottom layer of tourism for Seattle. Both had points I thought were interesting and valid.

Virtually everyone I came across this month was coming from somewhere and on their way to somewhere else. Populations in transition (homeless, people who work here but live somewhere else, or tourists) are a big part of the personality of this neighborhood. Lately though there is a growing voice of more permanent residents who really appreciate the advent of businesses that in turn, care about them. Those are the ones that are open on the weekends, when the residents are actually around (Zeitgeist, The Mercantile, Rainshadow Meats to name a few). Pioneer Square needs more places like this where people can meet and hang out.

This month, the theme of Transitions seemed appropriate.

Winston Churchill argued that we shape our buildings which then they shape us. The same is true of our digital technologies. Twitter, Facebook, and Instagram played a major role in the ability to connect and share local events as they unfolded. But what of our neighborhoods? How does Pioneer Square shape those who live in it?

That really impacted my perspective as I heard people’s responses. I think it’s true. Pioneer Square was a main supply stop for those on route to Alaska for the Klondike Gold Rush in 1897 and 1898. The buildings and zoning reflect that with saloons, card rooms, hotels, and supply mercantiles.

No one is headed to Alaska for gold now. The new gold is in software code and the many start ups making their home in Pioneer Square. And there are many new stores ready to help supply them.

What do People of Pioneer Square appreciate most?

This month I asked folks what they liked most about Pioneer Square. Without hesitation, most everyone replied that they are passionate about old buildings and like to see them preserved. A most unscientific survey, this appeared to be universal across the homeless, people here on business, tourists, and residents.

The residents and businesses of Pioneer Square of have had to fight to be heard on the topic of preservation. So when you look at those buildings, know that it took a group of concerned citizens and businesses to save them.

And, they are intimidated by the homeless, the drugs, the violence, and the perception of a lack of safety and order.

It’s a red-light district. It’s where the homeless, the prostitutes, the drugs, the violence, and the generally unsavorable congregate (or are relagated to reside).

This is some of what people think of when they think of the underbelly of a red-light district.

It’s not easy to boost your neighborhood with a red-light district stigma. It wasn’t that long ago (2006), when a federal judge left Seattle Officials with two politically distasteful choices when he tossed out the city’s 17-year moratorium on new strip clubs:

Pioneer Square is not alone in its desire to clean up and repair its image. Columbia City, Georgetown and Beacon Hill have all had their share of pain in this regard. All have exciting revitalization projects underway.

Most municipalities with sex workers or dancers opt for a “red light district” as a form of containment. The claim is to regulate the commercial sex industry and contain the spread of sexually transmitted diseases. The question then becomes, Do we want to regulate it, control it and contain it for the health benefits of our citizens and our visitors? The thinking is, if we don’t control it, we’re going to have rampant infestation of all sorts of health issues.

In 2006, city councilman Peter Steinbrueck, who chairs the planning committee, said he hoped to quickly pass the Sodo proposal and move on. But then dozens of neighbors and the local media attended an April hearing where residents of the nearby Georgetown and Beacon Hill communities complained that their areas are too often chosen for undesirable uses, such as sex offender housing and a proposed garbage station.

A goal toward vibrancy.

The goal of revitalization is a goal toward a very subjective concept called “vibrancy.” Vibrancy means a buzz of people interacting and transacting in mutually beneficial exchanges – positive interdependecy (both economic and social). Jane Jacobs, infamous urban planner of the 60s, imagined people on the street and sidewalks, jostling and bumping as they went about their daily businesses, often in street-level retail establishments just off the sidewalk.

Cars don’t help. In the car-based world, that vibrancy is more hidden. Sure, you can see the cars (sometimes way, way too many cars in congested traffic), but you don’t really see the people or the interactions as they hide inside the cars, strip centers, and office buildings. They’re there, but we don’t “feel” them as much as we do in a classic Jane Jacobs walkable neighborhood.

Vibrancy is about pull. Vibrancy creates a very simple decision for people: is there some interesting or necessary activity that draws me out of my home? Work? Shopping? Socializing? Whether I’m in a walk-up apartment or a house in the suburbs, the question is the same. More options increases the likelihood of drawing me out. And I have to weigh-up those interesting options against the barriers to going out, particularly mobility: how much time, effort, and money is required to go do this activity? A good, cheap restaurant is an easy choice when it’s right down the street, but a harder one in heavy traffic with unpredictable parking or with some long walks and subway rides in possibly unpleasant weather. There’s always leftovers in the fridge and something on TV, the mortal enemies of “vibrancy”.

In the car-based city, density tends to stay in a reasonably narrow and low range because of the need to accommodate cars and parking but mobility is variable: average trip speed is very dependent on the availability of high-capacity, smoothly-running arterials and freeways.

Here is where you can track and participate in Pioneer Square’s revitalization planning.

Question: Is this Pioneer Square’s problem, or everyone’s problem?

Catch Me On The Corner,