“In times of crisis, we lack judgment, and that is a constant reference for me,” the pontiff said in an in-depth interview with Spanish newspaper El Pais. “The most obvious example of European populism is Germany in 1933. After the crisis of 1930, Germany is broken, it needs to get up, to find its identity, a leader, someone capable of restoring its character, and there is a young man named Adolf Hitler.” 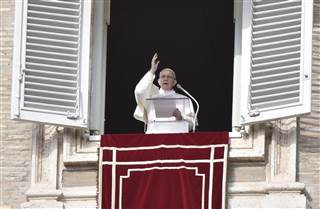 “Hitler didn’t steal the power, his people voted for him, and then he destroyed his people,” the pope added.

Pope Francis’ warnings come as a wave of populism washes over Europe, and as voters angry with traditional political elites throw their weight behind nationalist, anti-immigrant leaders. More…

For those looking to combat panic with considered thinking, I’ll be updating this bookshelf page periodically with interesting reads.

Experts in authoritarianism advise to keep a list of things subtly changing around you, so you’ll remember.

The True Believer: Thoughts on the Nature of Mass Movements by Eric Hoffer

The famous bestseller with “concise insight into what drives the mind of the fanatic and the dynamics of a mass movement” (Wall St. Journal) by Presidential Medal of Freedom recipient Eric Hoffer, The True Believer is a landmark in the field of social psychology, and even more relevant today than ever before in history. Called a “brilliant and original inquiry” and “a genuine contribution to our social thought” by Arthur Schlesinger, Jr., The True Believer is mandatory reading for anyone interested in the machinations by which an individual becomes a fanatic.

Strangers in Their Own Land: Anger and Mourning on the American Right by Arlie Russell Hochschild

In Strangers in Their Own Land, the renowned sociologist Arlie Hochschild embarks on a thought-provoking journey from her liberal hometown of Berkeley, California, deep into Louisiana bayou country—a stronghold of the conservative right. As she gets to know people who strongly oppose many of the ideas she famously champions, Hochschild nevertheless finds common ground and quickly warms to the people she meets—among them a Tea Party activist whose town has been swallowed by a sinkhole caused by a drilling accident—people whose concerns are actually ones that all Americans share: the desire for community, the embrace of family, and hopes for their children.

Strangers in Their Own Land goes beyond the commonplace liberal idea that these are people who have been duped into voting against their own interests. Instead, Hochschild finds lives ripped apart by stagnant wages, a loss of home, an elusive American dream—and political choices and views that make sense in the context of their lives. Hochschild draws on her expert knowledge of the sociology of emotion to help us understand what it feels like to live in “red” America. Along the way she finds answers to one of the crucial questions of contemporary American politics: why do the people who would seem to benefit most from “liberal” government intervention abhor the very idea?

America, the Possible I and II

The case for the transformation of today’s American capitalism into something truly sustaining for people and planet rests on two related propositions:

1. System failure. Today’s system of political economy and its principal product, economic growth, destroy the environment, and not in a minor way but in a way that profoundly threatens the planet. Equally, they are not delivering economic and social well-being. People will therefore increasingly demand solutions, but the current system will not be able to deliver credible answers and so will lose legitimacy. Dissatisfaction will multiply. Meanwhile, America’s political economy will be severely stressed by multiple pressures, general overload, and buffeting events at home and abroad, including scarcities and rising prices. Having lost resiliency and coping capacity, it will be highly vulnerable to crises that will open the door to major change.

2. A better world. The affluent societies have reached the point where, as John Maynard Keynes forecast, the economic problem has been solved; the long era of ceaseless striving to overcome hardship and deprivation should be over; there is enough to go around if it were shared. But this prospect and other hopeful possibilities contrast sharply with everyday reality, so people are increasingly fed up and are seeking and building something more meaningful. A positive alternative to the current order is coming into view, taking shape on the horizon. People and groups are busily planting the seeds of change through a host of alternative arrangements scattered across the landscape, principally at the local level, and are identifying still more directions for upgrading to a new operating system. We can imagine now the articulation of a new American Dream and a new explanatory narrative, the appearance around the country of new and attractive models, and the projection of a powerful set of new ideas and policy proposals confirming that the path to a better world does indeed exist.

These two developments will raise consciousness, inspire hope, open the door to deep change, and help launch a powerful movement that can transform the current system.

It All Turns On Affection, Wendell Berry

When he accepted the invitation to deliver The Jefferson Lecture—our nation’s highest honor for distinguished intellectual achievement—Wendell Berry decided to take on the obligation of thinking again about the problems that have engaged him throughout his long career. He wanted a fresh start, not only in looking at the groundwork of the problems facing our nation and the earth itself, but in gaining hope from some examples of repair and healing even in these times of Late Capitalism and its destructive contagions. As a poet and writer he understood already that much can be gleaned from looking at the vocabulary of these problems themselves and how we describe them. And he settled on “affection” as a method of engagement and solution. The result is the greatest speech he has delivered in his six decades of public life. It All Turns on Affection will take its place alongside The Unsettling of America and The Gift of Good Land as major testaments to the power and clarity of his contribution to American thought.

We have taken this opportunity to include a small handful of other recent essays and a wonderful conversation between Mr. Berry, his wife Tanya Berry, and the head of the National Endowment of the Humanities Jim Leech, which took place just after the award was announced. The result offers a wonderful continuation of the long conversation Berry has had with his readers over many years and as well as a fine introduction to his life and work.

The Places that Scare You: A Guide to Fearlessness in Difficult Times by Pema Chodron

We always have a choice, Pema Chödrön teaches: We can let the circumstances of our lives harden us and make us increasingly resentful and afraid, or we can let them soften us and make us kinder. Here Pema provides the tools to deal with the problems and difficulties that life throws our way. This wisdom is always available to us, she teaches, but we usually block it with habitual patterns rooted in fear. Beyond that fear lies a state of openheartedness and tenderness. This book teaches us how to awaken our basic goodness and connect with others, to accept ourselves and others complete with faults and imperfections, and to stay in the present moment by seeing through the strategies of ego that cause us to resist life as it is.

Owning Our Future: The Emerging Ownership Revolution by Marjorie Kelly

As long as businesses are set up to focus exclusively on maximizing financial income for the few, our economy will be locked into endless growth and widening inequality. But now people are experimenting with new forms of ownership, which Marjorie Kelly calls generative: aimed at creating the conditions for life for many generations to come. These designs may hold the key to the deep transformation our civilization needs.

To understand these emerging alternatives, Kelly reports from all over the world, visiting a community-owned wind facility in Massachusetts, a lobster cooperative in Maine, a multibillion-dollar employee-owned department store chain in London, a foundation-owned pharmaceutical company in Denmark, a farmer-owned dairy in Wisconsin, and other places where a hopeful new economy is being built. Along the way, she finds the five essential patterns of ownership design that make these models work.

To understand the theory governing the White House, look at The Fourth Turning.

Points of Interest (from the interview):
So in the end, he wants to destroy the whole system and scorch the earth to allow for new growth, which he will lead.
***NOTE this research is from the book The Fourth Turning by William Strauss and Neil Howe***

Be neighborly, pass this along